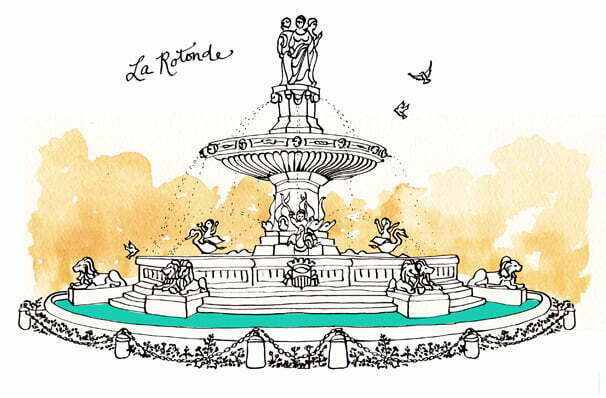 There are dozens of fountains, and no wonder, because Aix en Provence sits atop limestone that is riddled with springs. After all, it’s original, Roman, name was Aquae Sextius. Not all the fountains are as elaborate as that of the Rotonde, which has the three ladies gracing its crown, representing Agriculture, Justice and the Arts (it was built in 1860). This is the fountain everyone uses as a landmark—the rest of the town is all relative to “La Rotonde”, at the base of the Cours Mirabeau.

A more humble, but just as beloved, fountain is La Fontaine Moussue. In 1668 apparently there were cherubs in there; now we only see lumpy green moss that grows year round from the warm water that emerges onto the Cours Mirabeau. I like the amorphous little fountain, which manages to express some of the mystery of the Provençale culture. 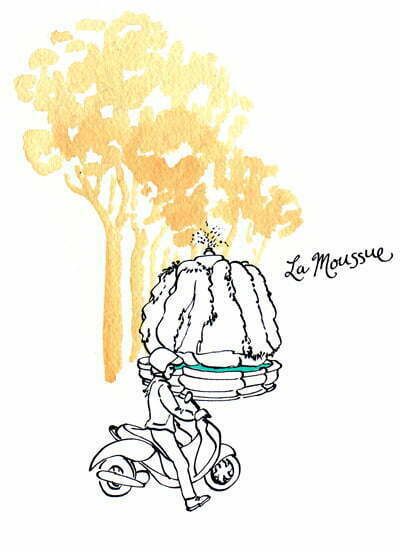 Further up the Cours is another blobby moss-covered fountain, also built in the 17th century. This one is called La Fontaine des Neuf Canons. In this case the “canons” are not military in concept, but simply the word fountain designers use to name the tubes that project the water out. In the old days, when it was masses of sheep that thronged the avenue rather than tourists, it refreshed the animals on their way (called the Transhumance) to the Alps. 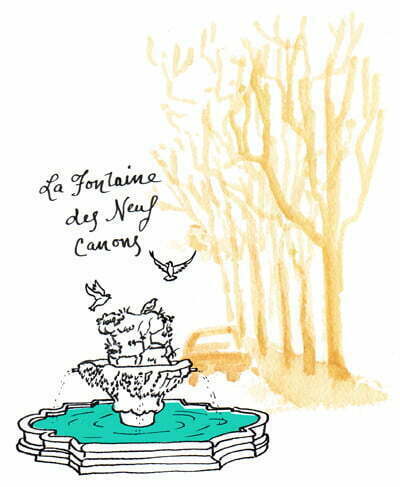 Situated next to a café which cools bottles of rosé in its waters is the 1632 Fontaine des Trois Ormeaux. The ormeaux (elms) are long gone, but the Platanes-shaded spot it occupies is a nice place to take a break. 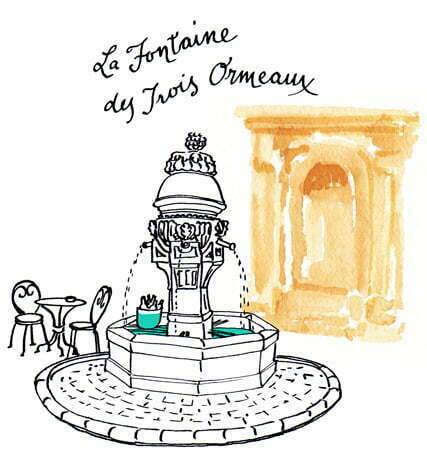 Réné of Anjou (“Le Bon Roi”), brother-in-law of Charles VII, king of Naples, and Count of Provence (and many other titles) was a powerful force in 15th century, barely-unified France. The great patron and generator (a poet) of the arts died in Aix, and his fountain represents him with a smile, and the accoutrements of the cultivated lord that he was. (He also holds a bunch of wine grapes.) His fountain was erected in 1819, and sits at the top of the Cours Mirabeau. 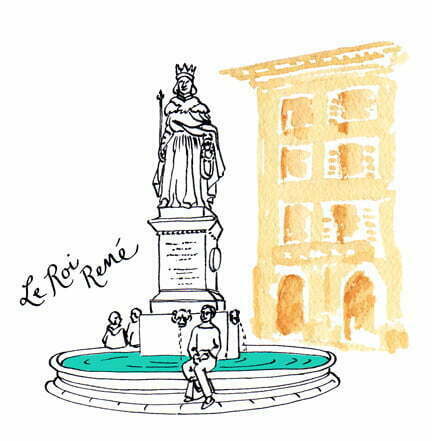 My favourite fountain is that of Les Quatre Dauphins, built in 1655. It sits on its handsome eponymous square surrounded by fancy hotels particuliers (wealthy folks’ homes).

If you visit the Marché (Tuesday, Thursday & Saturday mornings) up at the Place de l’Hotel de Ville, you’ll see its fontaine. I don’t find it particularly distinguished (built in 1755) but it’s nice to see that it serves a function (well, not just now, as it appears to be undergoing repair)—providing fresh water for the Marché aux Fleurs. 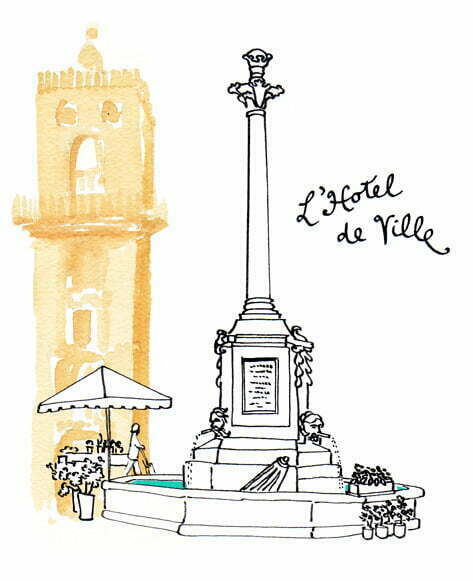 A site I often see is a gaggle of youngsters, sketchbooks on their knees, draped around the Place Albertas. Their instructors bring them here to appreciate the elegant proportions of the Square, where this fountain resides. The metal 1912 fountain is nothing to write home about (though there are always tourists taking its photo), but the surrounding 1730’s buildings raise its stature. 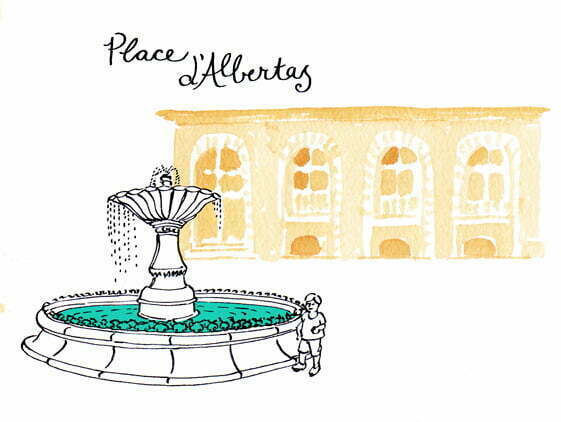 Rounding off my selection of 9 fountains is that of the Place des Precheurs. I included it because it’s so tall and majestic. It sits in front of the Palais de Justice and was designed by a famous Baroque sculptor, Jean Chastel, in 1758. The fours guys depicted on the medallions on the base of the obelisk are: Sextius Calvinus (Roman founder of Aix), Charles III du Maine (last Provençal count), Louis XVIII (who was a Count of Provence along with being the future king—at the time of the fountain’s construction, he was only 1 year old, so my guess is that they chipped out his portrait later), and the contemporary Louis XV . 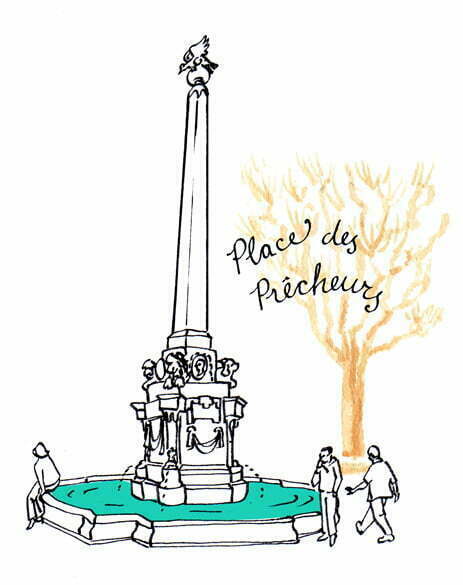 I have designed a silk scarf (about 1 meter square) with the fountain theme. 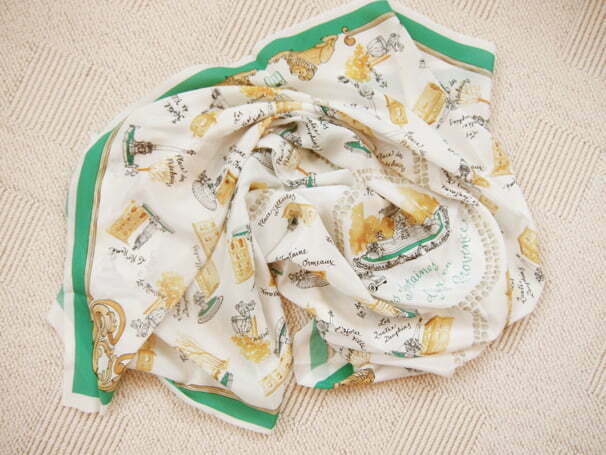 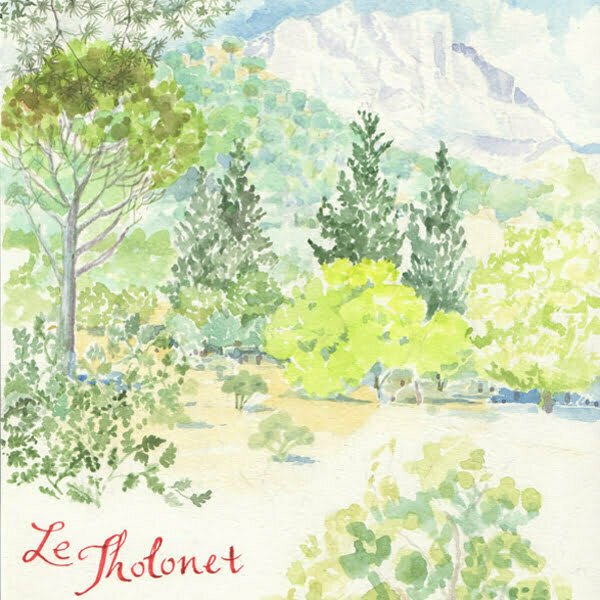