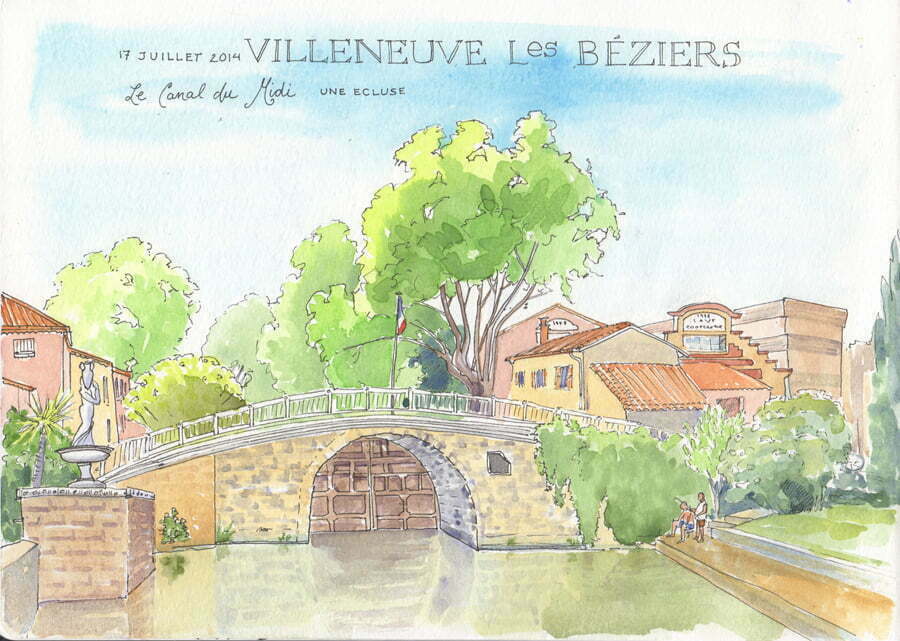 I was lucky enough to have been invited to join my friends/family Dick & Barbara Currier on their holiday cruising the Canal du Midi. The barge they rented was luxurious, with 3 cabins—each with its own bathroom—a comfortable, well-equipped kitchen, plus the top deck, where we spent most of our time. The Canal was built during Louis XIV’s reign in the 17th century, to connect the Atlantic to the Mediterranean. It starts in Toulouse and empties out around Sête. It starts at 130 meters, rises to 190 and ends up, of course, at 0 meters above sea level (I’m guessing the initial height is above sea level because it begins on the Garonne River, not really the Atlantic) I experienced how locks (écluses) actually work, and made a video: 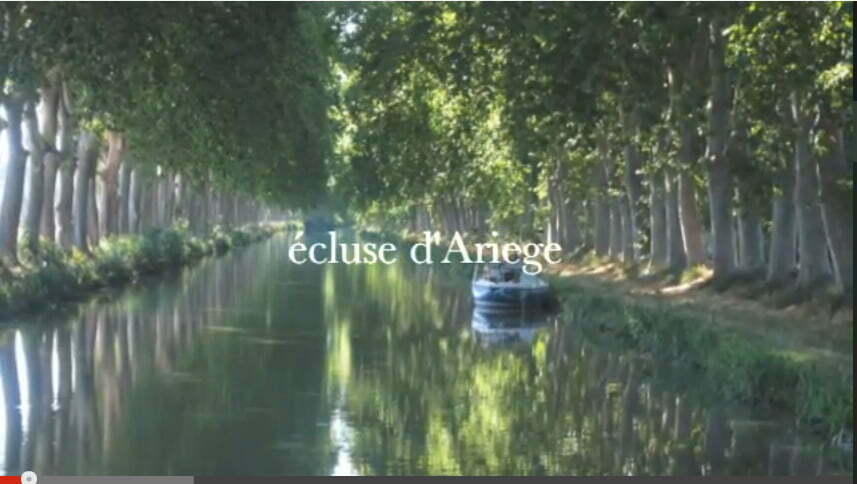 One ties up in the lock, which is opened on your side (i.e. the level of the water is the same as the section—”Canal pound”—where you are coming from), and then closed up behind, isolating the lock. Water is then let in or out to adjust lock levels to match the pound you are aiming for. When this is reached, they open up the other side to let you slip through. While some locks are auto-regulated, there still are lock keepers and their homes or shelters posted at most locks. Here’s one cute cottage

and an equally cute lock keeperess, with her little log device: 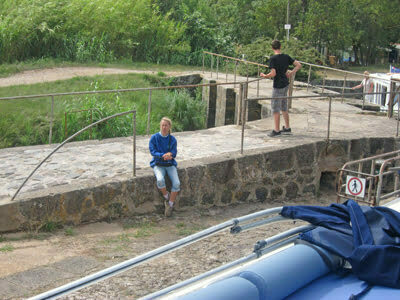 Along the canal there’s a big range in boat styles. Mostly rental boats like ours, but also plenty of representatives from the Canal culture, including ecological-minded loners like this one: 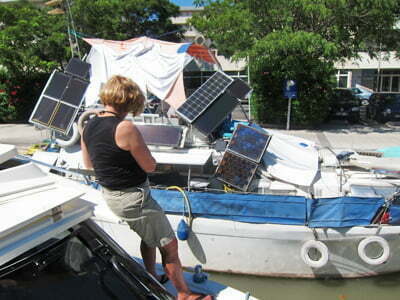 Sadly, there were also quite a few sunken wrecks, simply abandoned on the side. Another sad sight was the dead platanes (Sycamores), victims of a devastating fungus which is decimating those iconic trees of the French landscape.

All along the canal we were accompanied by duck families. Here’s a multi-ethnic one who followed us for a good bit: 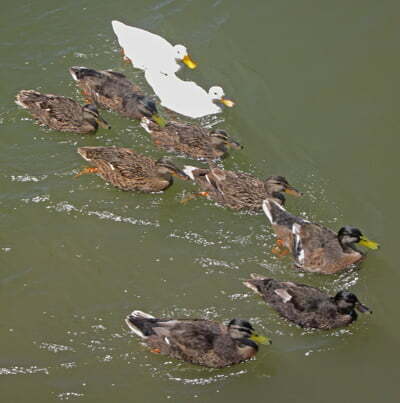 The pace on the Canal is slow—you can’t hurry those locks (Not to mention tant pis if you arrive at a lock during déjeuner hours). Here’s someone who gets it: 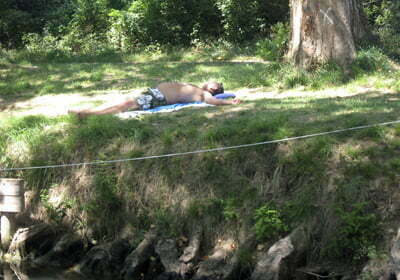 Though the water is murky and brown, there was wildlife to be seen, especially as we neared the Étang de Thau (an étang is a wetland pond), which has stricter pollution standards. Flamingos… 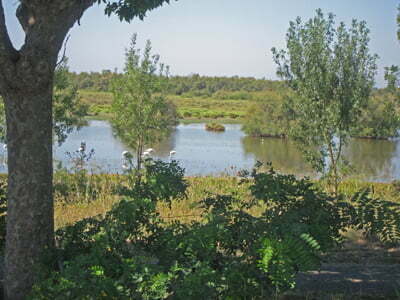 and even a large river otter: 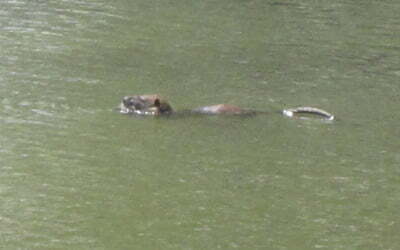 Eventually we arrived at the Ètang de Thau, which is huge, and were refreshed by its sea breezes. 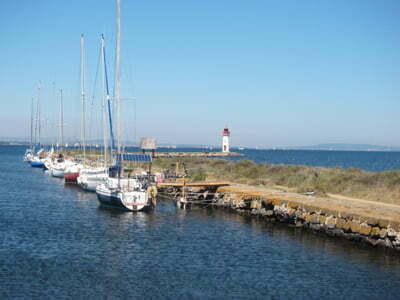 We arrived at the utterly charming village of Marseillan, where we enjoyed a splendid meal at the Flemish family-run restaurant, Chateau du Port. This is the view from where we tied up; the restaurant is in the big building on the left. 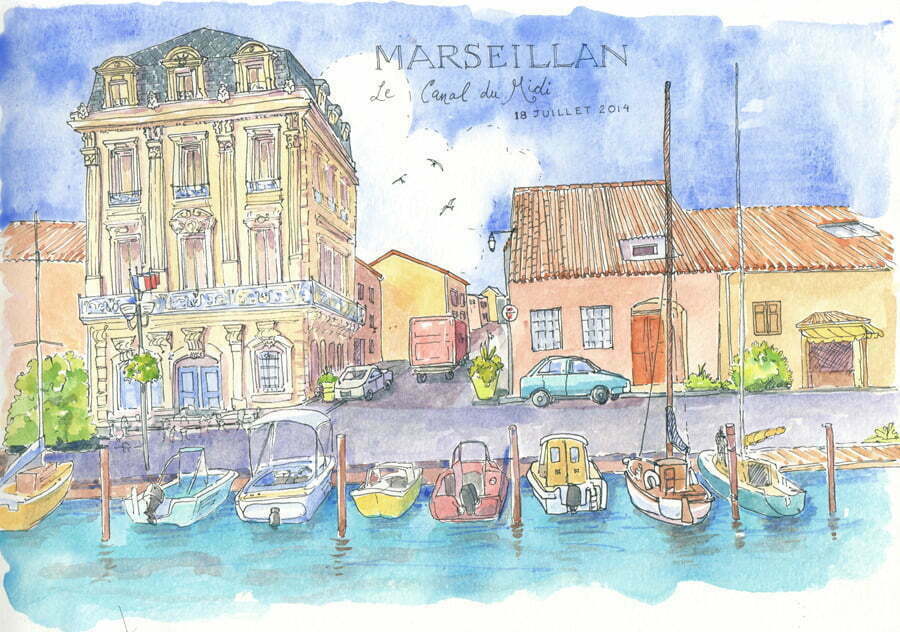 Thank you, Dick and Barbara, for a really wonderful time! 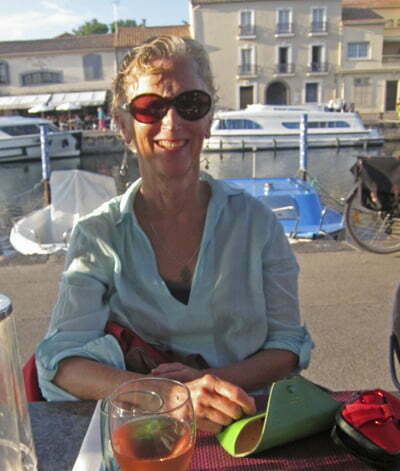 Comments are now closed for this article