Just back from a short visit with a friend to Italy’s capital. The city is much smaller and greener than I remembered, and looks like a nice place to live. Although I was there for only 3 1/2 days, we packed in a lot. We stayed at an elegant apartment (on Via Guilia, with the little square —2—right outside the building) right in the heart of the historic city, so , although the basalt cobblestones were challenging, we were able to get to most sites by foot.

Certain themes came up over and over: beautiful typography either from the original Romans, or the Catholic Church reminded me  I still am a graphic designer at heart. 3 was inscribed at the entrance of the Santa Maria in Trastavere; 5 accompanies the Vatican’s remarkable maps of Italy on display in their museum. 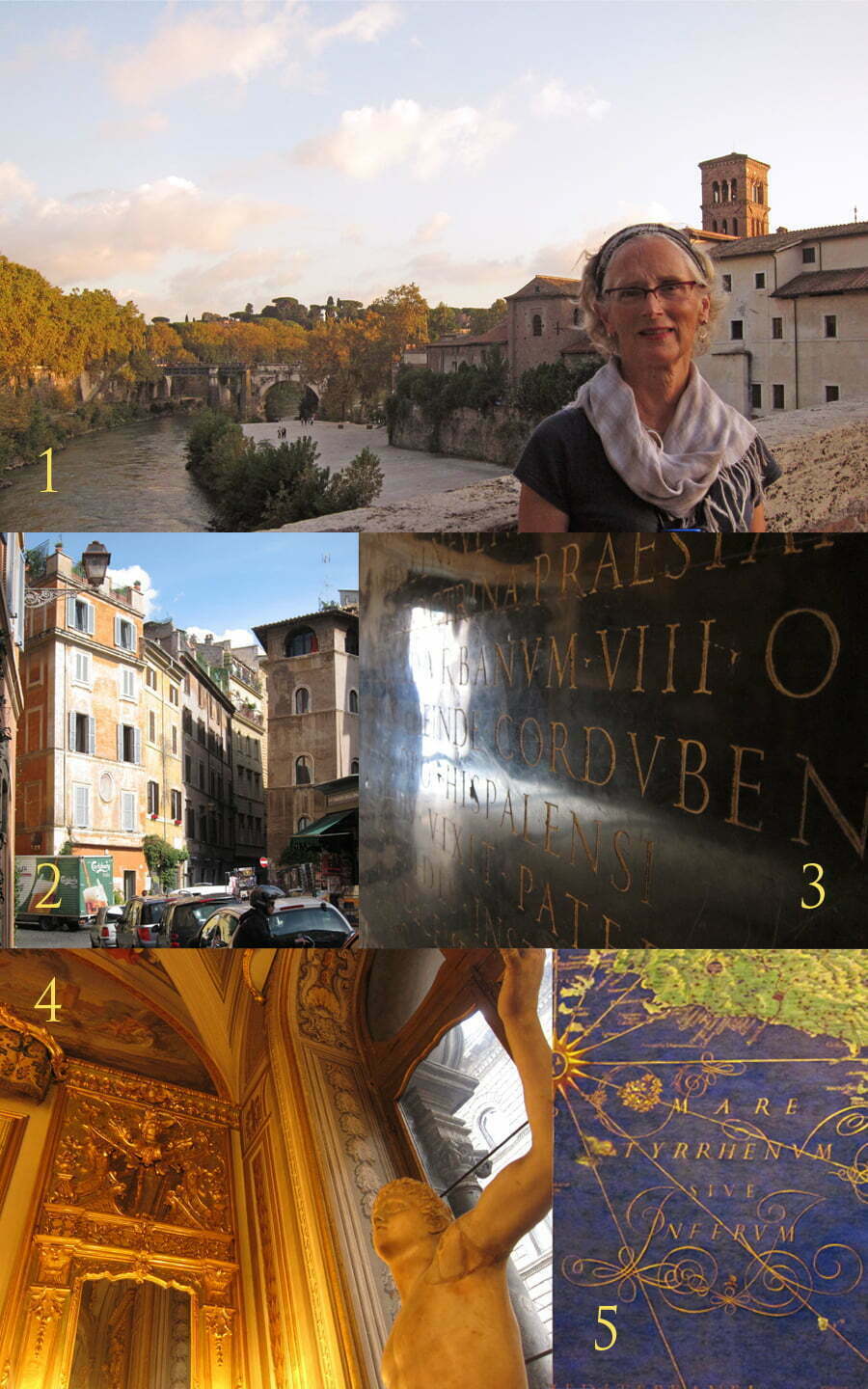 We had one rainy day and we spent a leisurely morning and lunch at the Galleria Doria Pamphilj (4) where we were regaled with what seemed like dozens of Caravaggios, and a little period concert (our first taste of Italy’s passion for music) in one of the opulent halls.

Our first evening we walked across the Tiber (1), past the tiny island of Isola Tiberina and ate a marvellous meal in the district that used to be the Jewish ghetto. Of course we ordered the famous artichokes—Carciofi all Guidia, which are deep fried and delicious. Another favourite we ordered more than once is the simple pepper and pecorino pasta, Cacio e Pepe. 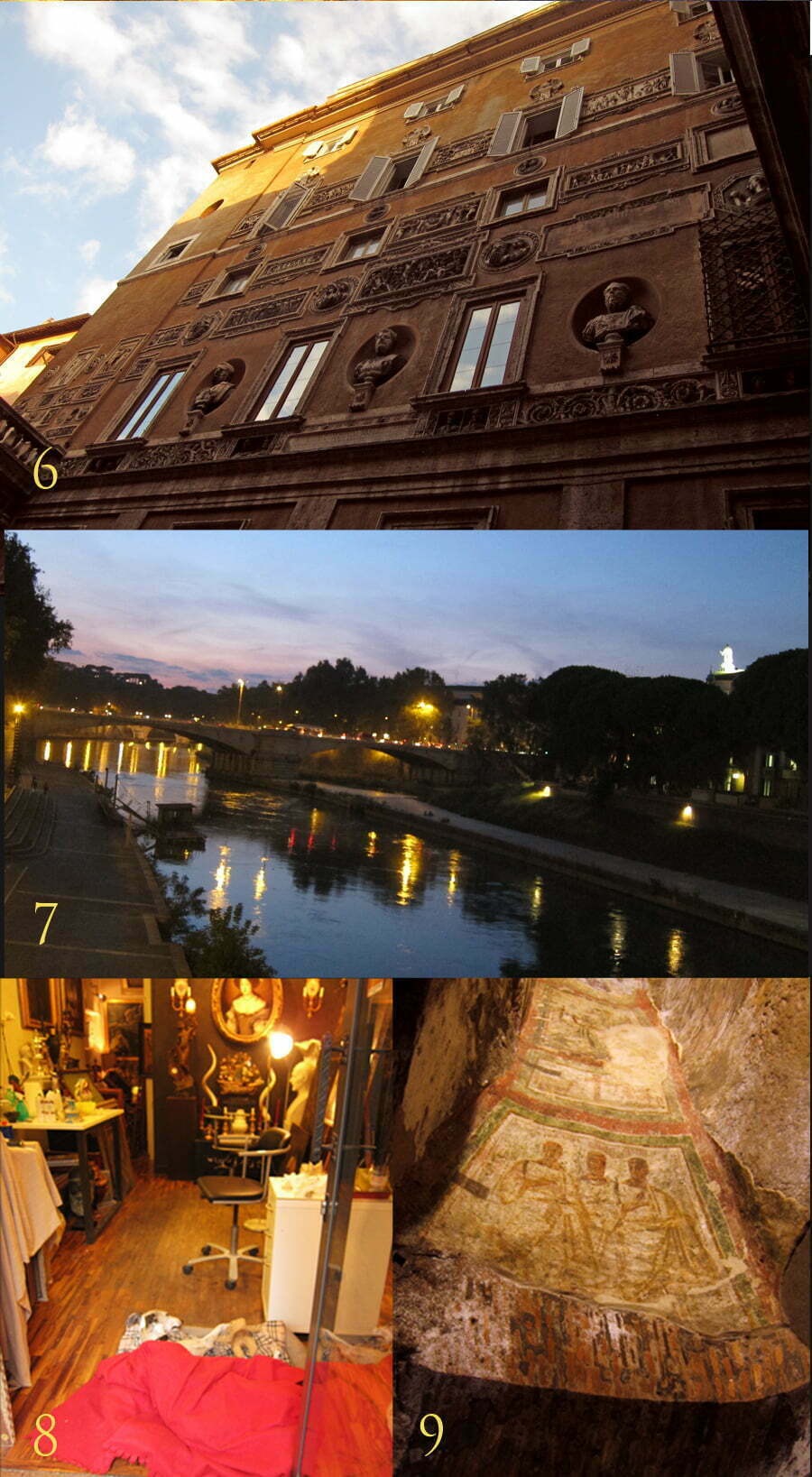 Rome is a reddish city (6), with either terra-cotta coloured stucco, or the ubiquitous bricks, whose usage spans before the days of the Roman Empire all the way to contemporary structures. Along with the ruins, which infest every empty lot and construction site, the city is defined by the Tiber (7) running through it. Sculptures and sculpture detritus cram every building, public and private, and adorn the many fountains in the Piazzas.

I imagine most Romans make their income from the bounty that is their heritage: either through the myriad facets of tourism, or in the supportive role of restoration and antiquities. 8 is a tiny shop open to the street, where an Italian (of course) greyhound took his nap amid artwork as graceful as he.

Public transportation is mysterious and scarce in Rome. Their metro system seems mostly to serve the outskirts of town (I imagine they don’t dare dig under the centre of town!), and the buses are perplexing: one needs to buy tickets in advance, but once purchased are only good for 90 minutes; and we never did find out where they sold said tickets. So we took a taxi to the Via Appia, the road originally (around 300 BCC) built to link the capital with Brindisi and southern Italy. It was a sunny Sunday and we walked the very same path worn down by chariot wheels, whose grooves are still there for you to stumble on.

Along the Appian Way are a few catacombs. The Romans cremated their dead, so it was only with the Jews and the Christians whose need for burial that the catacombs were commenced. Burial within the city limits was forbidden, and so these outsiders took to the countryside along the Appian Way. The volcanic tufa is conveniently easy to dig into, and they created a honeycomb of what looks like vertical shelving for their purpose. Once Christianity became against the law, the Catacombs were an easy target to round up and execute the worshippers. Our guide, a Jesuit priest, gave us the gory details of the martyrs buried there. I took a quick, illicit photo of some early Christian artwork down there (9) 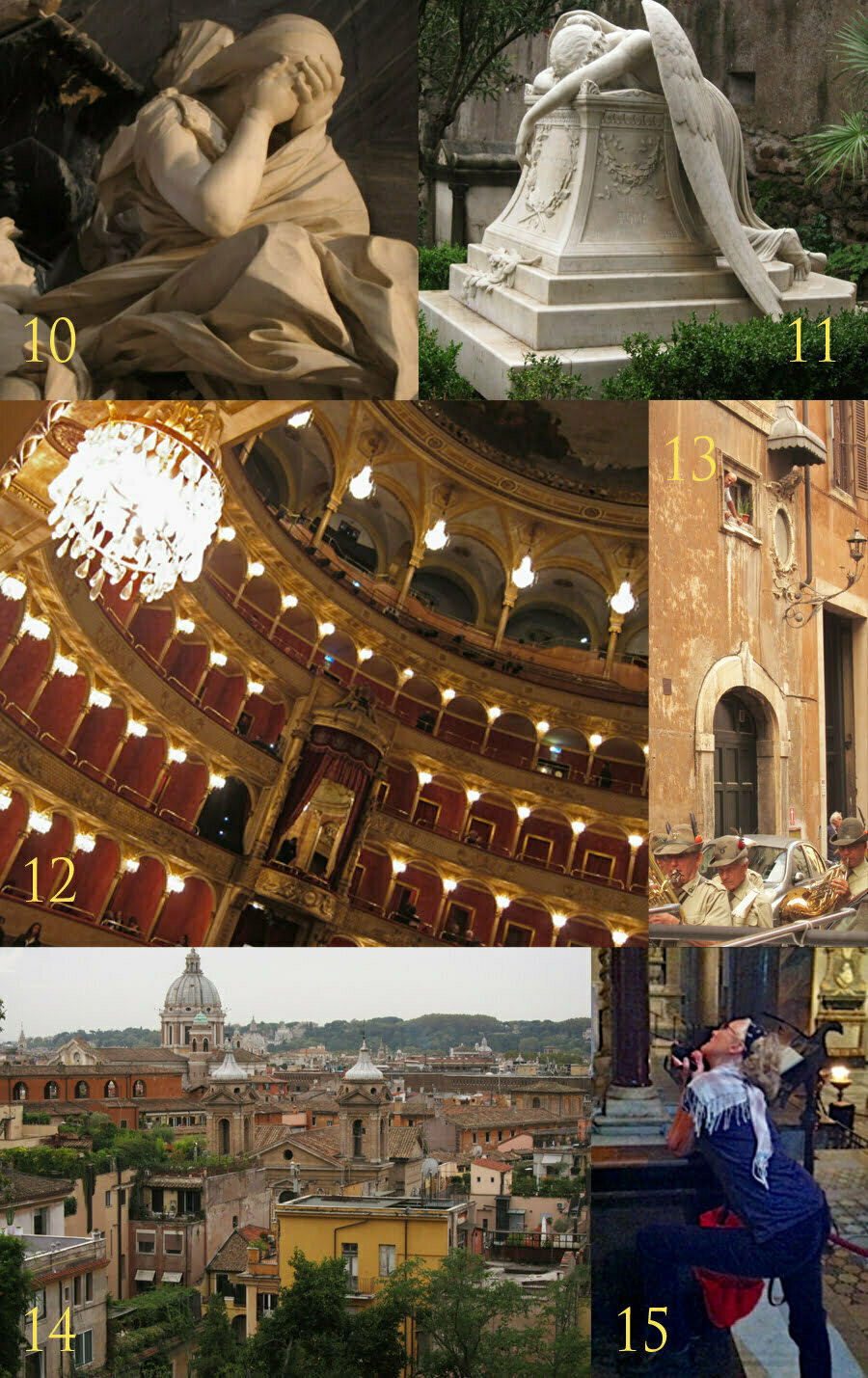 No one does expression like the Italian sculptors: 10 is from a Bernini design at the Santa Maria Sopra Minerva; 11 is from the “Non-Catholic Cemetery” which we visited in the appropriately gloomy rain, to see the Keats and Shelley tombs, among the other expatriates who fell in love with the city and died there.

As I wrote earlier, Italy loves its music, and we were regaled with a marching band (13) along the Corso Vittorio Emanuelle, as well as the Kurt Weil opera, the Rise and Fall of the City of Mahagonny, at the Teatro dell’Opera (12).

One thing I want to warn you about: the crick in one’s neck we tourists inevitably get after hours of peering at ceiling mosaics(15), towering monuments, the Sistine Chapel, rooftop gardens, and English super titles. And with all the restoration and renovation that goes on in this ancient city, you’ve gotta watch out for falling tools and whatnot from scaffolding! 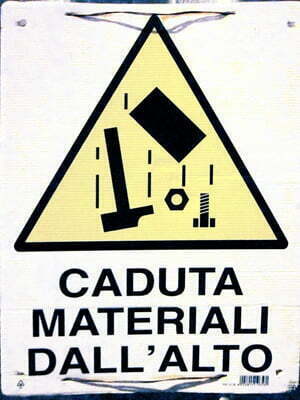