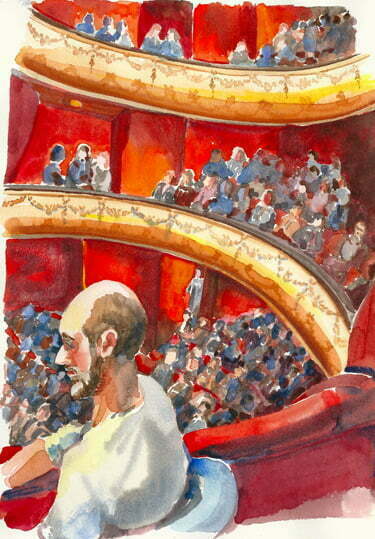 Theatre is alive and well in Aix en Provence. I went to see a play at Theatre du Jeu du Paume (named after an indoor game “Paume” = palm, as in handball, of a version of tennis played amongst noblemen), and was introduced to the intriguing world of French theatre. We were 4, and since a couple of us (myself included) obtained tickets at the last minute, we were dispersed throughout the audience. Lucky me got a ticket in the “Loges”—those intimate enclosures that hang left & right over the stage, but I was confused when I saw the locations of  the other seats: “Corbeille” (basket)?; “Paradis”? My friends, who participate in amateur theatre themselves, were happy to explain: “Corbeille”, which nowadays generally means “wastebasket”—as in the computer’s “trash”— in the centre balcony. It is named after the carved architectural ornaments of baskets of fruit and flowers that often adorn the old building. In the old days, that’s where you went if you wanted to be admired. That’s the spot for royalty. And “Paradis” is where the cheapest seats are: up against the ceiling, where images of frolicking gods & goddesses reside amogst the clouds, hence “Paradise”.

I also learned the words for stage left (côté cour),  and stage right (côté jardin), which originated in 1771 based on terms established by  stagehands working in productions performed for the king and queen in the Tuileries garden. Stagehands were usually recruited from ex-sailors, and it was they who came up with this practical means of orientation, similarly to a ships “starboard” and “port”. 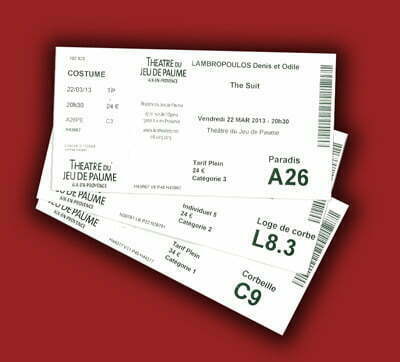 The crowd, which ranged from a child of about 12, to—what is more usual for American theatre audiences—octogenarians, was very animated, both before the show, and after, when everyone crowed together to discuss their shared experience. (My group, energized by the production, felt the need for a post-theatre unwind at the bar next door). There were lots of kids in their twenties, and working-aged folk in their 40’s, 50’s & 60’s—this, a work night!

The theatre itself is beautiful. The space is not too large, and the audience is enveloped in rich red velvet and burnished gold. I shared my Loge seat with a young couple, who seemed to be come to the theatre frequently, as they seemed to know a lot of people sprinkled around the audience (the Loge seats are great for people-watching). 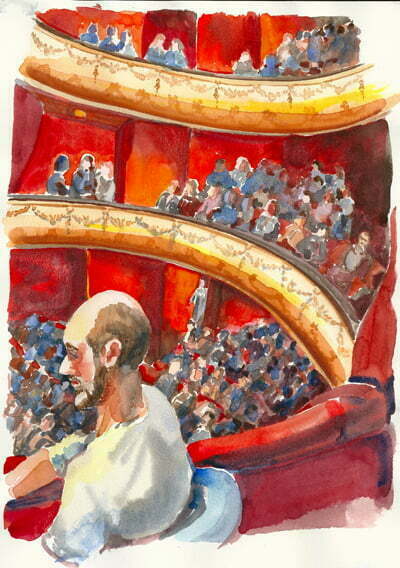 The play was the English-language “The Suit”. It was a fantastic show, with actors Nonhlanhla Khesua & Jared McNeill giving moving performances. The imaginative staging, which was at once minimalist and rich, was done by Marie Hélène Estienne & Franck Krawczyk, along with Peter Brook. There were always three musicians on stage, and Miss Khesua sang beautifully. The story took place in the dark days of   1950’s Apartheid in the little South African village of Sophiatown, which was demolished because of post-war segregationist legislation forcing inhabitants into blacks-only shanty towns “Homelands”.

While the tragedy of Apartheid was ever-present in the unfurling of this play, the plot actually was about a young woman’s (Mathilda) infidelity to her loving husband (Philomen). To punish his wife, and inflict upon her a constant reminder of her transgression, he forces her to address an empty suit (left behind by her lover when the couple was caught in flagrante delicto) as if it were a real person, seating it at table during meals, and omnipresent in their daily life. Watching the transformation of this vibrant young woman into a fearful and song-less shadow of herself brought me to tears. The play wasn’t all tragedy, though. There was lots of humour, much due to the clever manipulation of the sparse props (to show, for example, Philomen’s commute to work, he and a colleague mount one of those metal portable clothes hangers, using their strong abdominal muscles to “sit”, while hanging onto the rod, and utilising to convincing effect the jostle of the trolley).

Anyway, I loved every minute of it. Here’s a review of the show in the New York Times.