Wanting a break from bustling, noisy Buenos Aires, and on the recommendation of a tango friend from there, I chose to spend a few days over Christmas in Montevideo, Uruguay. To get across the Rio de la Plata I took a hydrofoil ferry called “Buquebus”, setting out from Puerto Madero. We launched into the brown river and for two hours the chocolatey water was all I could see out the silt-streaked windows. 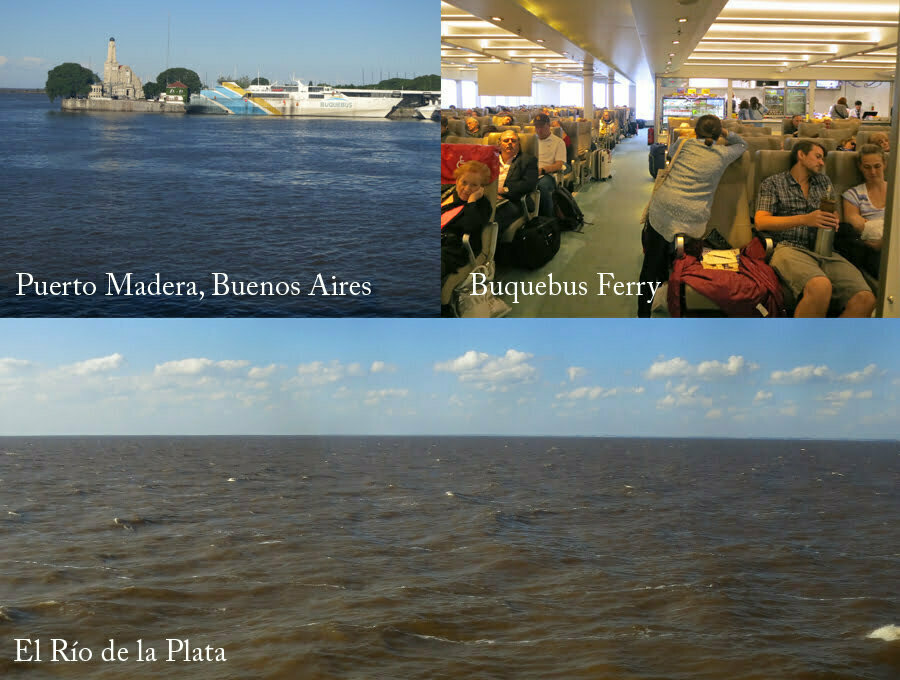 Families filled the boat with kids running around and their parents zonked out or drinking their mate.

Once in Montevideo, I stayed at an unusual AirBnB: The Casa del Museo de Cannabis. (Marijuana is legal in progressive Uruguay.) The Cannabis part was actually in an adjoining section of the house, which I did not frequent.

The city of Montevideo is not very large (1.3 million) compared to Buenos Aires (almost 3 million), and it was pretty easy to walk the length and breadth of the city centre. Having had enough of city life in Bs.As., I chose to relax around Montevideo’s nearby river and its parks.

About 10 minutes from my place was the enormous Rambla which seemed to have been built for many more cars than I witnessed (I guess it was because of the holiday week). There were no cross walks across this 6 lane road and I would scurry across to enjoy the waterfront.

In these photos you can see evidence of the ubiquitous mate, which I had already experienced in Buenos Aires. It’s a bitter green herb with mild caffeine effect. One ladles a generous pile into the specially designed cup and add hot water. As one drinks (or as is typical, one’s pals drink too), one adds more hot water from the accompanying thermos. There are clever metal straws with built-in filters that prevent the leaves from bothering the drinker. The cups have no covers and are vulnerable to spill, though the thick paté of leaves form a protective crust of sorts. What amazed me was how the inconvenience of this ritual (one must balance the liquid along with the obligatory thermos while on the phone or carrying bags or hiking). I liked the social aspect though, as everyone shares, and I did like the flavour. 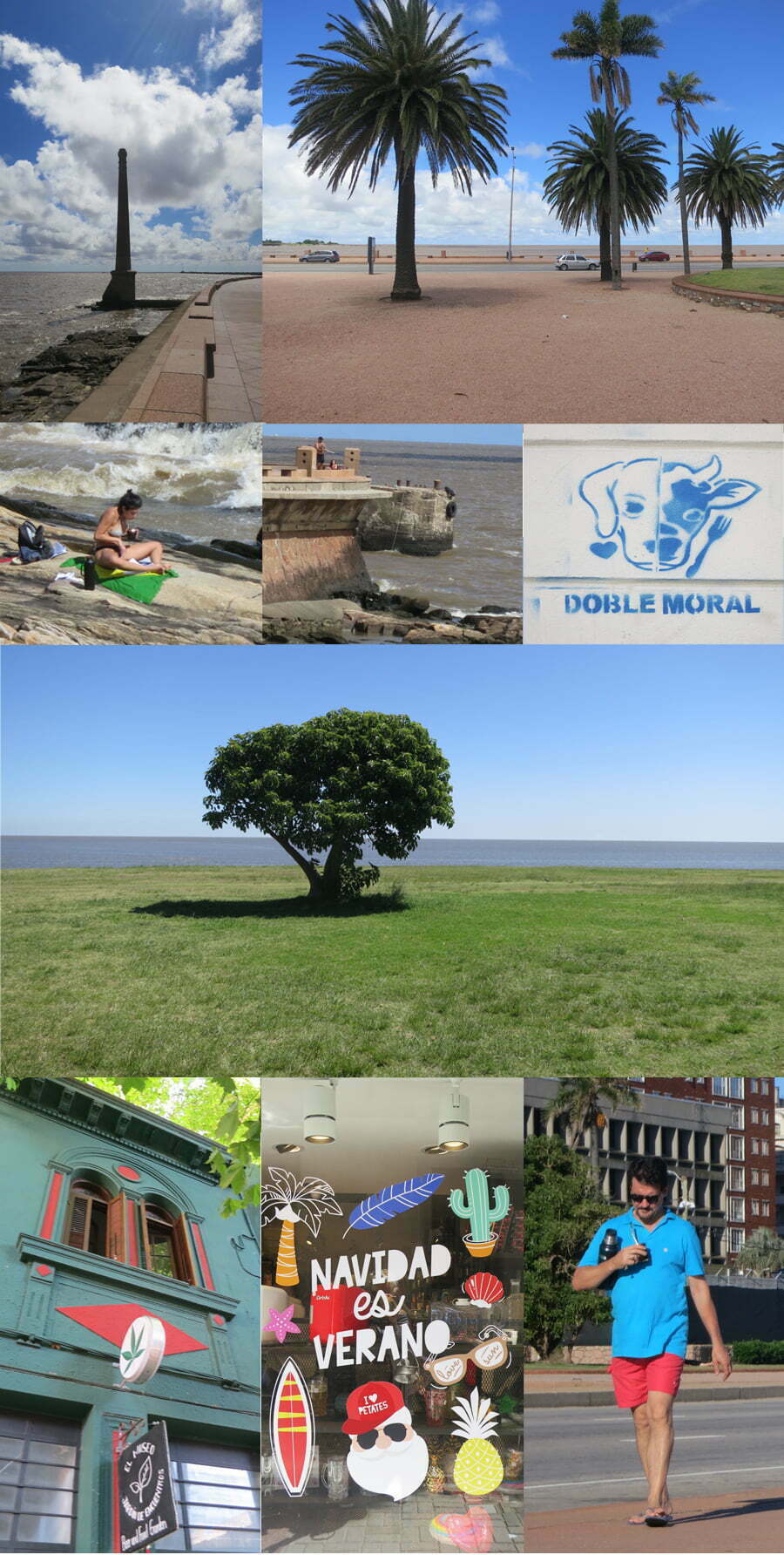 As in Argentina, the population really likes its meat which made it challenging for me to find eatables. Particularly at times of celebration like Christmas, the parrilla (grilled meat) is de rigueur. This made for very smokey streets, as the locals set up their open grills right on the sidewalks in front of their homes. I was glad to notice stencilled graffiti pointing out the contradiction between the population’s love for their dogs and indifference to other mammals.

In this riparian ecosystem, as in Buenos Aires, I delighted in the variety of colourful birds, who were in Springtime mode—lots of songs and bright plumage. I’d get all excited about a spectacular bird and, asking a native about its identity, got a shrug and a “Oh that’s just an ordinary …” using the common nomenclature. Nonetheless, I loved seeing all the avian variety. 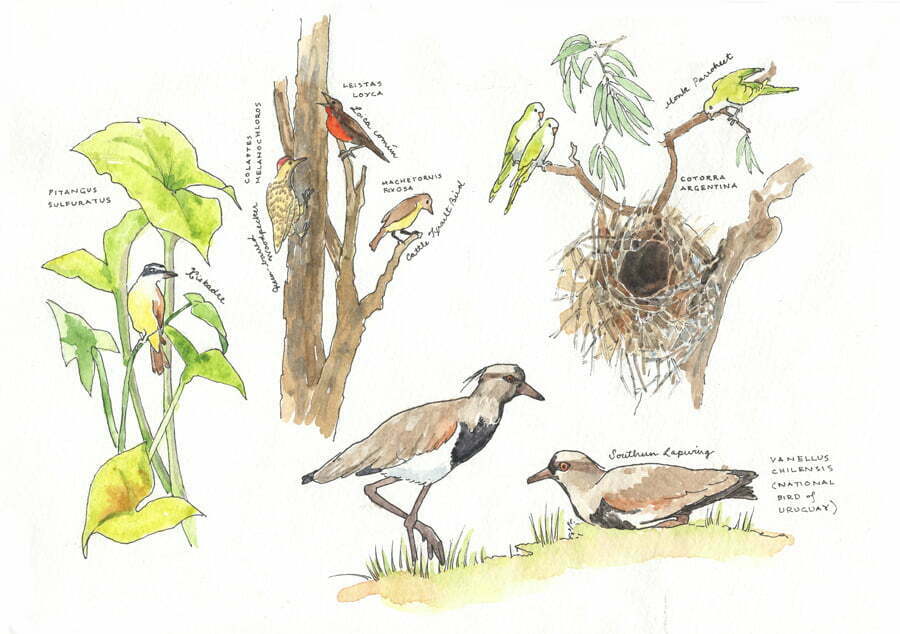 I spotted the Kiskadee in the nearby park, where there was an artificial lake. These birds (Bienteveo común) have a loud call that sounds like a dog’s squeak toy. Members of the insectivore Tyrant family, they also will eat small fish and snails.

The Green-barred Woodpecker (Pájaro carpintero) mostly eats ants and sounds a bit like a cross between a seagull and a cat. I saw this one in a park on tree trunk and poking around on the ground.

I cheated in the drawing, putting the lark (Loica común) in with the birds of the Delta. I actually saw him (for with its electric-scarlet breast, it was surely a male) on a bush in Calafate. It is common south of Buenos Aires, especially inland. Its song is a pretty chirpy-buzzing.

The Cattle Tyrant (Picabuey) bird thrives in the savanna of South America especially because it likes following the cattle with the accompanying flies. It’s a nervous flycatcher with a tiny cheap-cheap song.

I saw the fancy copper-eyed Southern Lapwings (Tero común) out in the open grassy spaces near the shore. They are becoming more and more common because of deforestation, since they like the grasslands. Their call is a repetitive high squawk.

In the tree above me at the Parque José Enrique Rodó in Montevideo I saw a huge nest (much bigger than depicted: it actually went all the way up and beyond the birds I drew) with a clearly demarcated doorway. The white faced monk parakeets (Cotorra) certainly drew attention to themselves with all the racket they made. 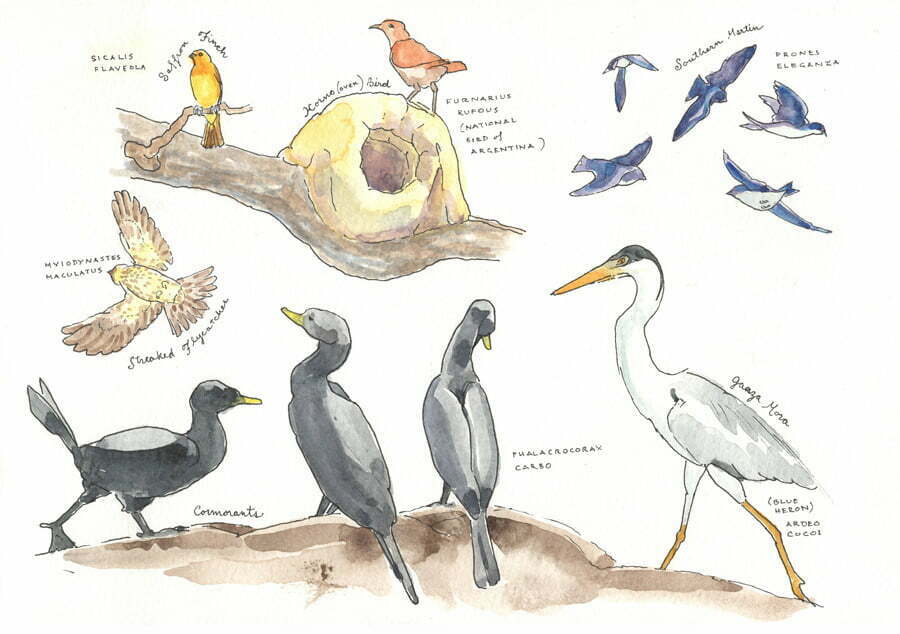 I saw seed-eating Saffron Finches (Jilguero Dorado) whose “cheap-cheap” sound like some sparrows. I saw them everywhere, as they have adapted well to human disruption.

The National bird of Argentina, the Hornero is a big bird (like an American robin). Their nifty attribute is their skill as builders of sturdy mud-and-straw nest homes. It’s bold chattery song matches the conspicuousness of their nests, which I even saw in downtown Buenos Aires.

I spotted the flycatcher (Benteveo Rayado) flitting around in trees near the river. Its aspect reminds me of the colour of a stringy avocado. It too is of a species that thrives in human-disturbed environments.

Along the shore I saw white egrets, lots of Cormorants (Cormorán Negro) and one or two blue herons, which I also saw on the grassy wetland way to Colónia.

Groups of martins (or maybe they were swallows?) shot around the shore swooping for flies.

The town of Montevideo is dominated by colonial architecture. Alas, the structures are mostly crumbling, with vegetation sprouting up amidst the cornices and curlicues. It was sad to see graffiti defacing most all of the buildings as well. It won’t be long, unless Uruguay can invest in renovating the structures, before the link to the past erodes away. In wealthy Europe, quaint old buildings are given new life and benefit the tourist industry; here their equivalents are rotting away. 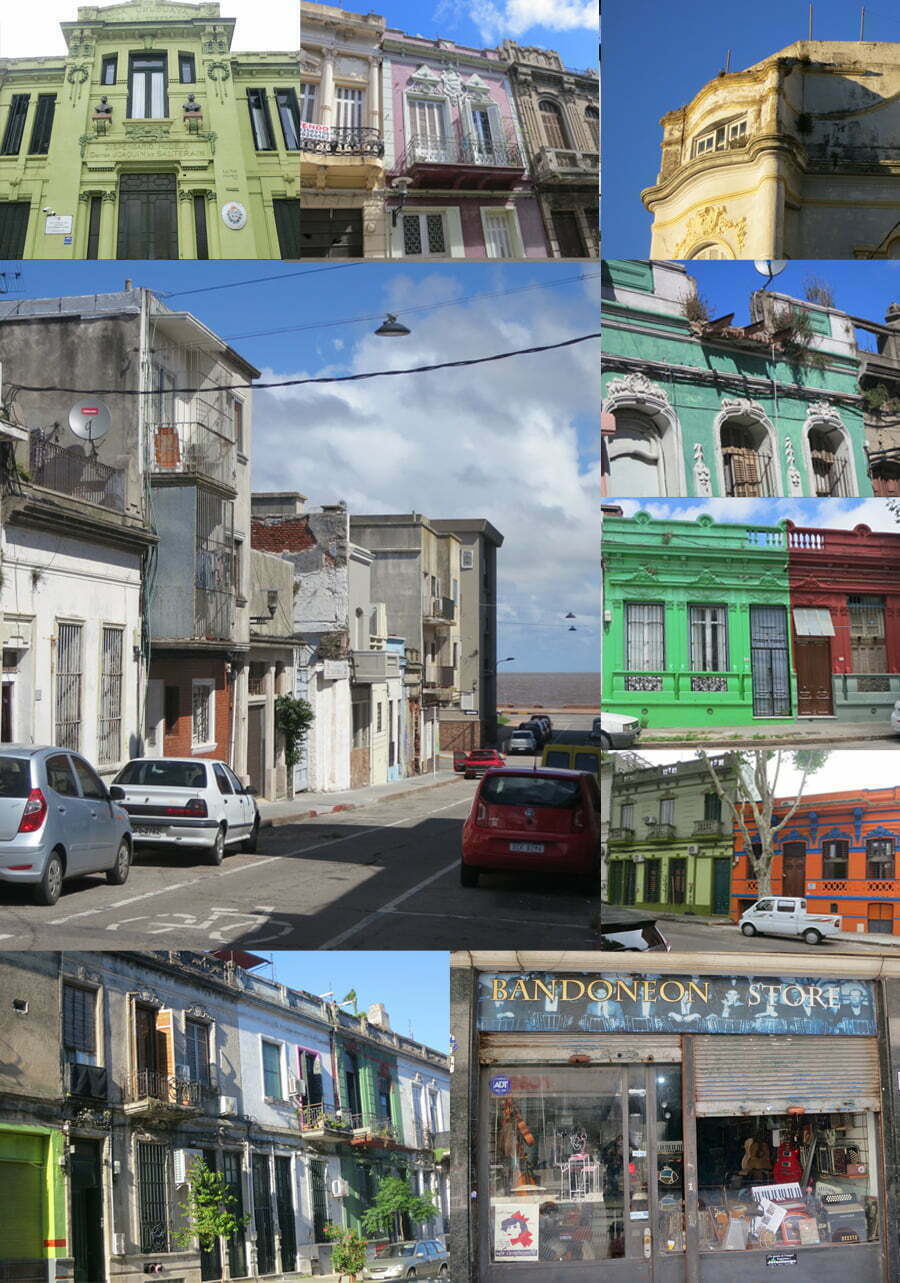 I was disappointed not to be able to attend any Milongas, since because of the holiday, there weren’t any. However, I was invited to my host’s rooftop Christmas Eve Asado (barbeque), which was a genial family affair where I fumbled in a mix of Spanish, French and English to participate in the conversation.

The day after Christmas I returned to Buenos Aires via the little tourist town of Colonia, originally an 18th-century Portuguese colony town. It has been preserved and renovated to hold onto the historical look. The streets are cobblestone and the houses colourfully stuccoed. There are nothing but restaurants and tourist shops and it is a sleepy little town that doesn’t even seem to be too overrun with tourists. A few hours sufficed for me to walk around and see what sights there were. The drowsy aspect of Colonia wasn’t always how it was perceived: the Street of Sighs may be named after the prostitutes who lived here, or maybe it got its name from the sailors embarking on dangerous (or piratical) voyages. 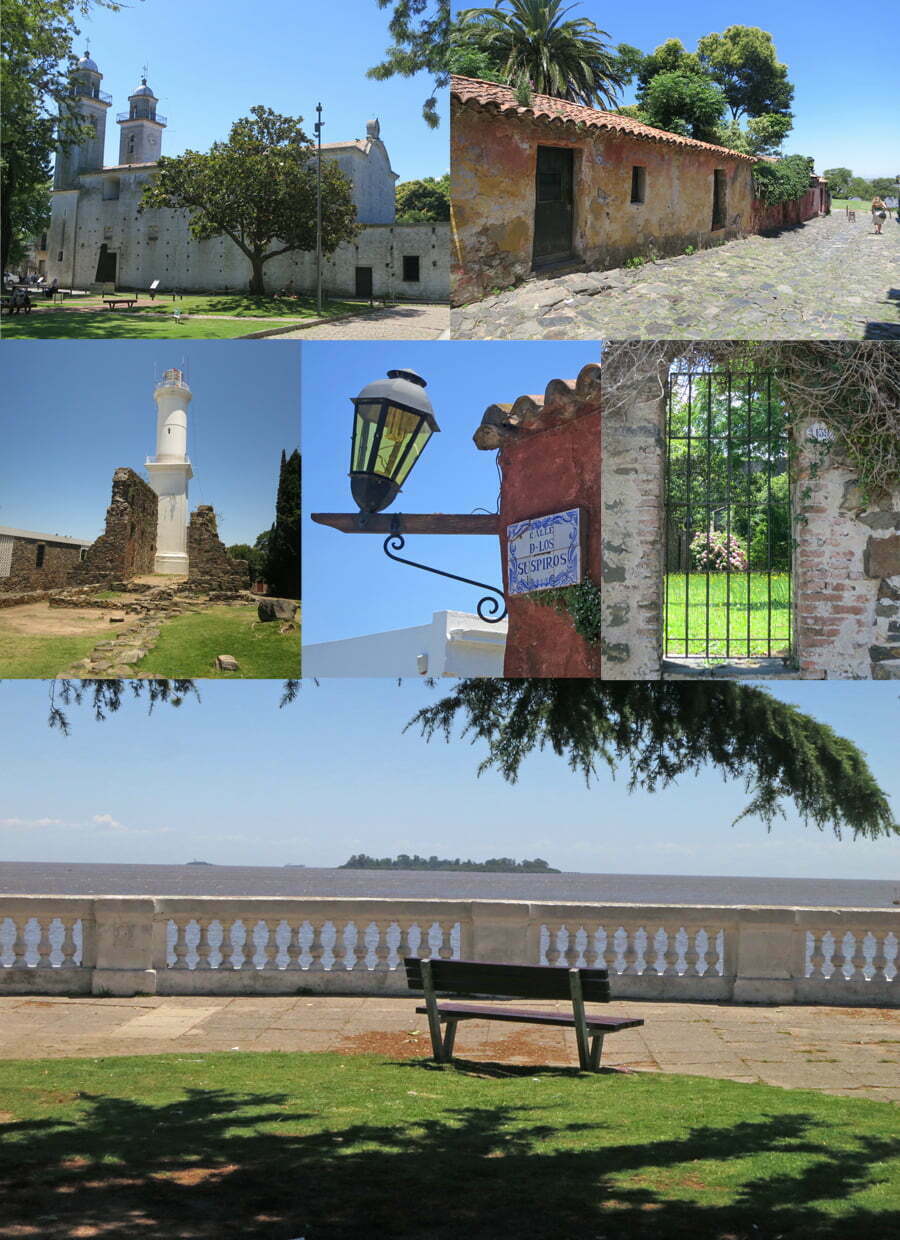 I returned to Buenos Aires to complete my six-week South American adventure.