Coming from Calafate, I flew over the Magellan Strait to come to the Tierra del Fuego, and the southernmost city in the world, Ushuaia. The town name comes from the native Yaghan language, meaning “deep bay”. The day I arrived was super windy, with gusts of at least 100 km/hour (70 miles/hr). They were putting up a wind-proof Christmas tree while was there.

It was sunny so I decided to spend the afternoon with a hike up to the Martial Glacier above town. The wind was so strong I couldn’t stand up when I got to the tree line so I turned back. Coming back down the trail I discovered a protected haven from the wild southerlies and in the ensuing calm, took a little nap with a view over the city. 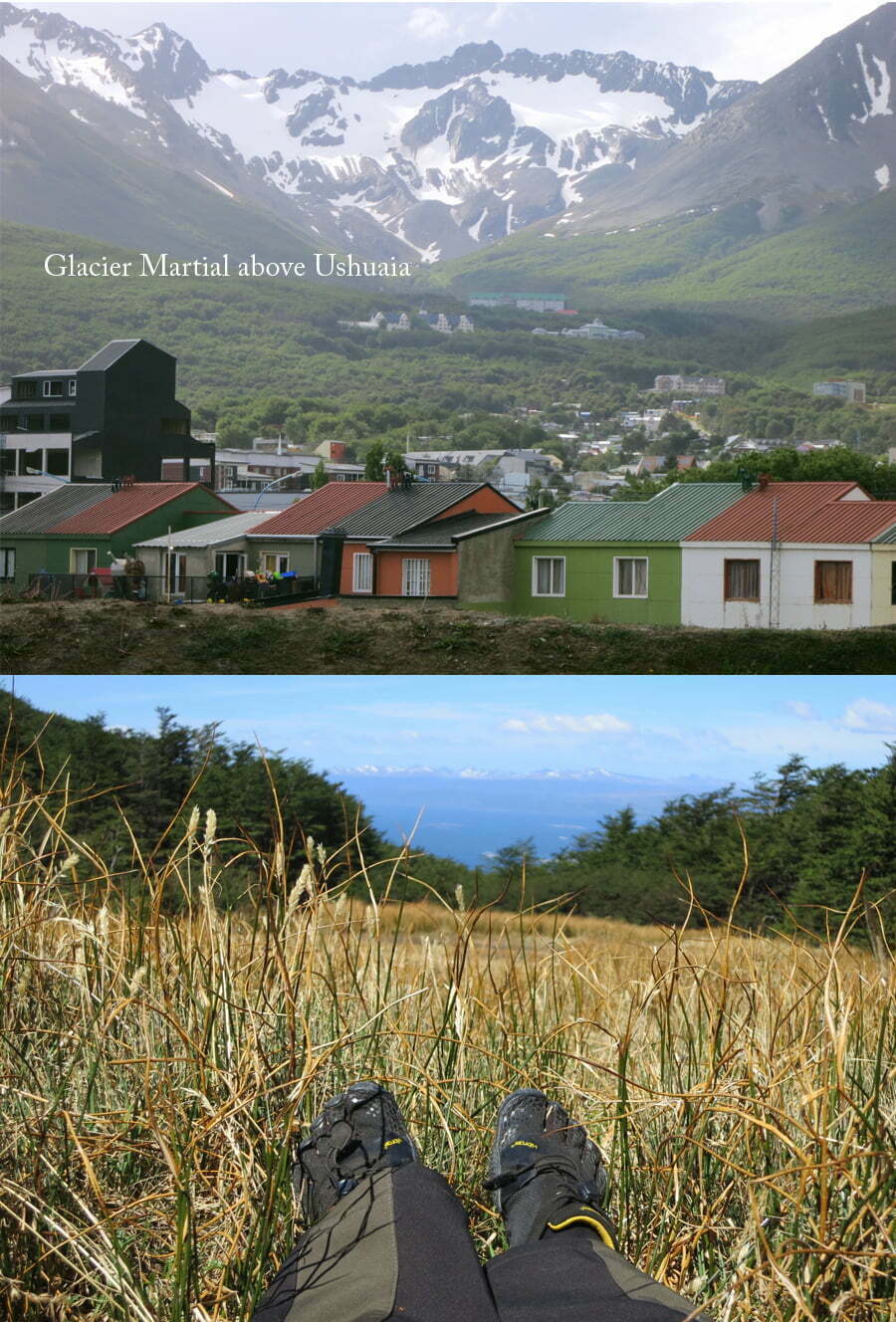 After coming back down, I still had plenty of daylight hours to explore the funky little town which to my surprise seemed to be built entirely of corrugated metal. I wonder how the citizens keep warm in what looked like poorly insulated houses. There was definitely a frontier town look to Ushuaia. I noticed that the population looked more Indian than the Argentinians of Buenos Aires.

The harbour has commercial container ships as well as pleasure boats (I wouldn’t get much pleasure from sailing these waters!). I could see the cruise ships that were poised to take tourists to nearby Antarctica. There is also a shipwreck you can see from the shore.

I took a late afternoon nap to recover from all the buffeting by the wind, but was awakened by a great brouhaha outside my hotel window: Apparently the favoured River Plate football team had won over the BOCA Juniors (see my post on Buenos Aires) and the Ushuaians went nuts for hours. 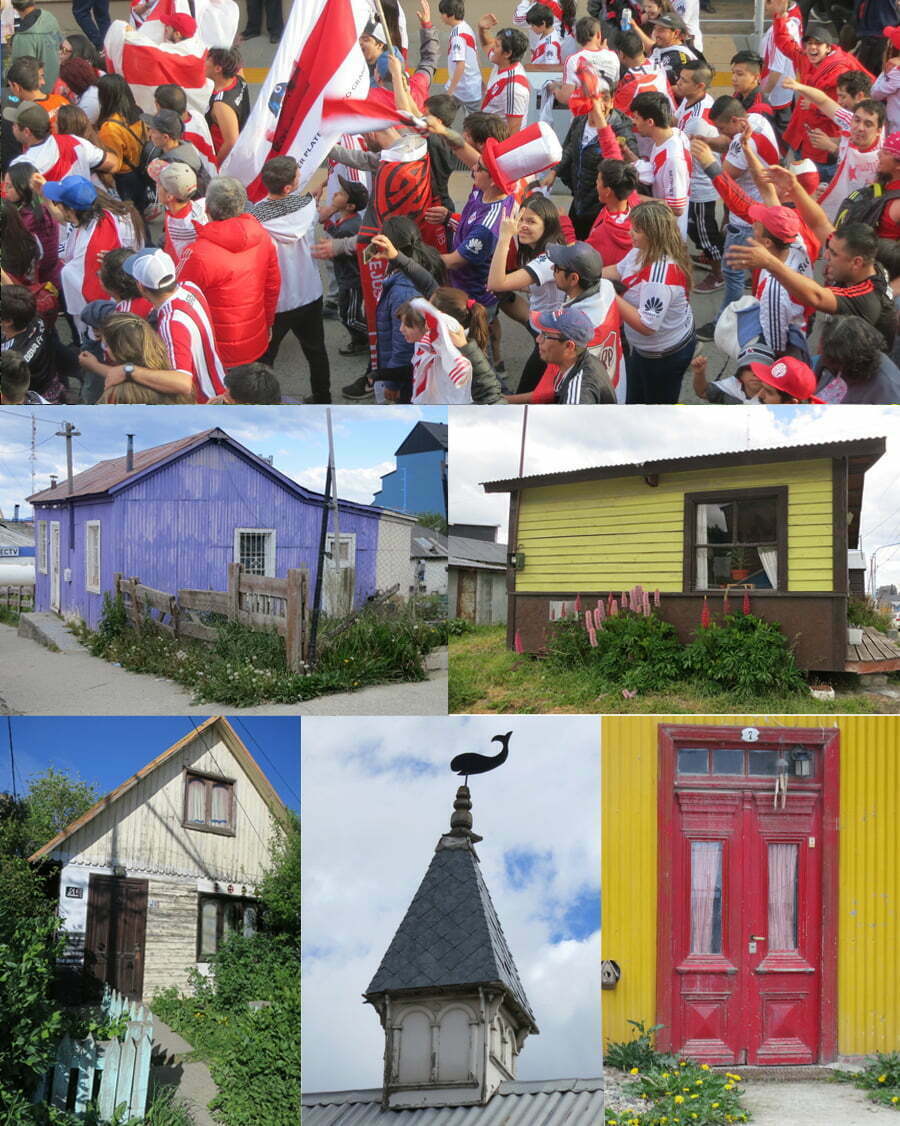 The next day I was taken, along with a few other tourists, on a day of hiking and canoeing in the Terra del Fuego National Park west of Ushuaia. The group was international and the companionship was great. The company Canal Fun organised my excursions in Terra del Fuego and they were terrific. Flor was our guide on the first day. She took us along the coast pointing out the vegetation and birds. With her help we could make out the midden mounds left over by the indigenous Yahgans. We donned canoe gear and (hurray no wind!) paddled to to Beagle Strait (named after the boat of Darwin’s famous voyage there).

In the forest we saw and ate “Indian bread”: bright yellow mushroom balls that ring many branches. (It has almost no flavour). We also tasted the spicy Wintersbark, which a navigator named Winter, concerned about scurvy, discovered was blessed with vitamin C. We were approaching the summer solstice and saw many geese and duck chicks along the waterways. Tiny flowers dotted the forest floor.

As we hiked and paddled around, I kept thinking of the Indians who used to populate this inhospitable and watery land. The Yahgan Indians lived their whole lives in their canoes, where the home fire smouldered in the centre. They were naked except fur capes, which was practical since they avoided hypothermia resulting from wet clothing. When missionaries pressed European clothes on them, they just sickened from the diseases that came along with. I remembered a very moving Chilean movie I had seen, which includes some of these people’s story (along with the recent tragedies due to the Pinochet regime), “El Botón de nácar” (The Pearl Button). 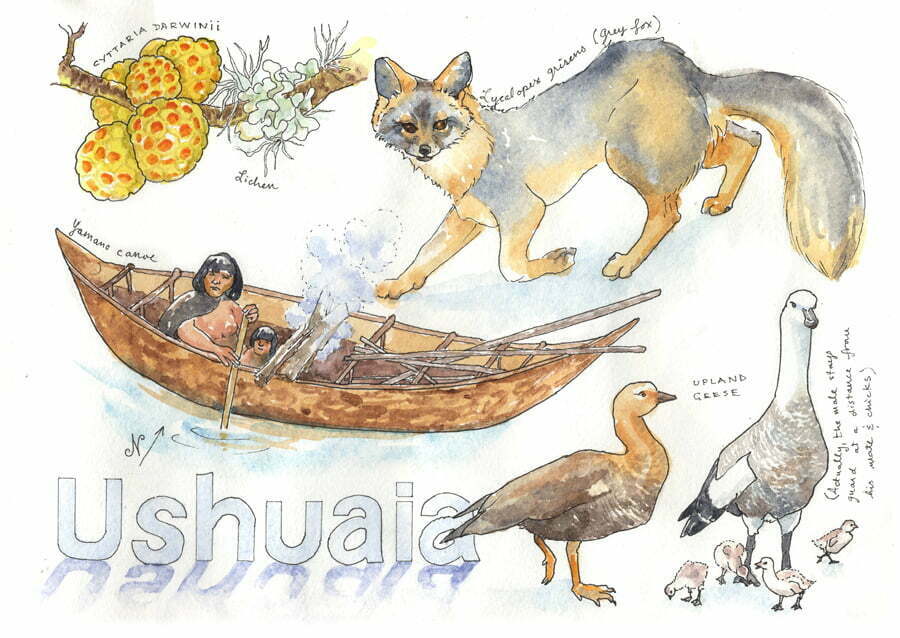 The next day brought me the highlight of my trip: a visit to the Magellan-penguin rookery on Martillo Island. Once again, we were just a handful of tourists, and this time it was Valentin who was our guide. Driving east (toward the Atlantic) out of town for about an hour over an unpaved road we got to a very isolated peninsula on the way during which we saw a few squatter cabins and a fox. We got to a launching beach and paddled in canoes to a dock where we took a small pneumatic boat to the island of penguins. Right across the channel was Isla Navarino, which is Chilean. In the video, you can see the edge of our boat, which the birds came right up to, tilting their heads so they could get a better view of us with their lateral-facing eyes. I loved the gentleness these animals exuded. Unlike most birds, their energy was calm, and they were peacefully quiet. We saw a couple of Emperor penguins amongst the colony.

In the afternoon, after a great lunch in an abandoned building on the old Harberton estancia we hiked across the island, and were treated to excellent views all the way to the main building of the non-working ranch. There’s a strange plant that grows only on the Tierra del Fuego. I don’t know its Latin name, but they call it a cushion plant. It looks soft, but in fact it creates a hard coral-like invasion of whatever plants it encounters. At the museum in the Harberton homestead were housed many skeletons of whales and seal lions. Apparently, the tip of South America sticks out into the otherwise empty circle of ocean around Antarctica, thus snaring any dead sea mammals that float by. We saw one live juvenile sea lion during our canoe ride.

The earth of Tierra del Fuego is far from fertile, and very very shallow, such that the roots of trees spread out in a vast shallow network, rather than digging down for support and nourishment. As a result, we saw many many uprooted trees that had tipped over due to the storms that are constant companions to the land. To make their lives even more tenuous, imported beavers munch the grown trees, and wild horses nibble on baby plants trying to establish themselves.

Valentin pointed out the hairy “Old Man’s Beard” that hangs off trees. This is a sign of very clean air, as this lichen cannot survive in pollution. At the end of our excursion we visited the famous “Flag Trees”, trees that are deformed by the prevailing Southerlies. Sometimes you can see a tree that only has leaves on one side (hence the “flag”). 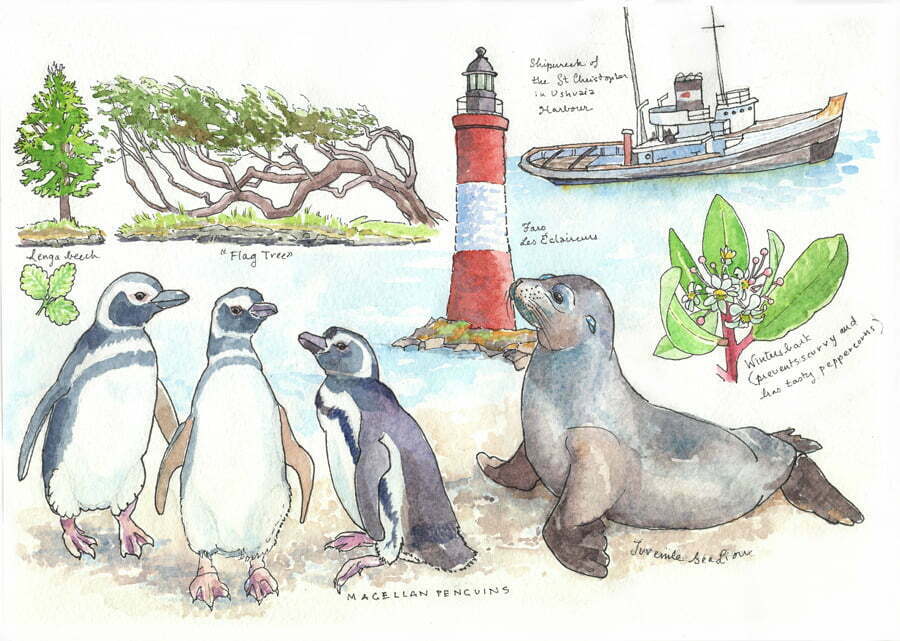 My whole life I have been in thrall to the mystery of far-away Patagonia. The reality was more interesting than the fables and I hope to return.