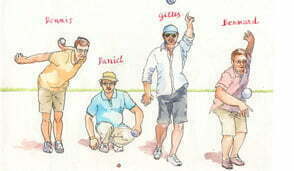 Every village in the south of France has at least one terrain de pétanques, a carefully calibrated patch of ground tamped down not too hard and not too soft, usually situated beneath a group of plane trees (pruned in the severe French way, which encourages dense shade).

In the afternoons, there you will find groups of locals, usually men, engaged in their game of Pétanques. The postures of those not actively throwing the boules express perfect relaxation, a key aspect of Provençale culture. Before I lose my American perspective, let me describe, like an anthropologist, what I see. 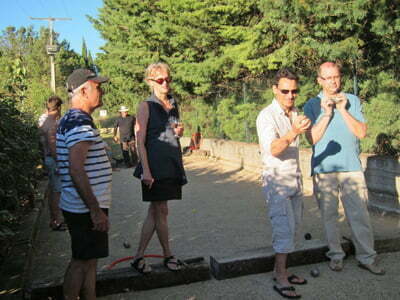 I prefer to be a spectator

First, the attire: In horror of  succumbing to an insolation (sunstroke—not a joke around here, though it usually afflicts only tourists who don’t know enough to get out of the sun at midday), everyone wears some sort of hat, whether it be traditional casquette (the old guys wear them, but recently, also hipsters, to whom the Kangol brand has new cachet) or baseball caps. Slip-on shoes with no socks are the usual footwear, though many eschew safety (you don’t want an errant boule landing on your unprotected foot) for flip flops or plastic sandals. This year, nostalgia has brought back rope-soled espadrilles too. As for clothing, it’s all about comfort, and while the les pépés seem to make an effort with their summer pants and short sleeved button-downs, most everyone wears loose cotton shorts and non-descript t-shirts. There is no Lycra in evidence.

The sport itself is not complicated; it’s easy to play with zero experience, but it takes years to get good. The steel boules are about 75 mm in diameter and weigh a hefty 800 grams. They are either shiny or dark (so you can tell your teams’ balls from those of your competitors’) and usually have incised patterns to further differentiate them. A cochonet, a little wooden ball about 30mm in diameter, is tossed onto the playing field from a spot defined by a curve scratched into the dirt with a foot, compass-style. It can land anywhere, though not next to the wooden perimeter. The object of the game is to get your boule(s) closer to the cochonet than those of  the competition. Points are awarded based on the number of boules that fall between the cochonet and the other team’s closest boule.

There are two ways to achieve proximity. The easiest was is to pointe, that is, aim carefully, taking into consideration the bumps in the terrain, and the distance. The other way, which, when well done, is very impressive, is to tirer. A tireur tosses his boule with a dynamic pitch, with an percussive underhand (but with the back of the hand uppermost). When well placed, his ball will snap a nicely-placed opponent’s  ball far away from the target. And the ball of a tireur can even dislocate the cochonet to an entirely different spot, which is frustrating to anyone who managed to get close, before the ricochet move. As long as the new placement of the cochonet is on the playing field, the game continues, albeit with a revised target.

Everyone has a favourite stance for pointer-ing and tirer-ing. Some squat down for a dogs-eye perspective (I can attest that this is hard on the thighs after a long game), some bend forward as if for a yoga posture. Extra balls are held in the non-playing hand (hard for a small-handed female), sometimes behind the back for a debonair effect. 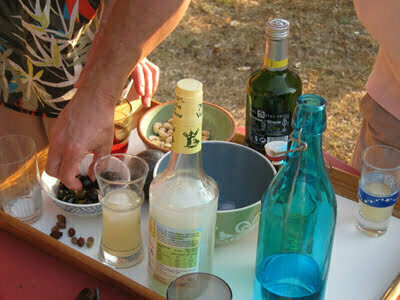 The official drink for Pétanque is Pastis, a liquorice (actually it’s anise)-flavored alcoholic beverage diluted with ice water. A table with the bottle, an ice bucket, and a pitcher of water is usually nearby, sometimes with savory snacks such as olives, or if you’re lucky, deep-fried zucchini blossoms. A refreshing glass of rosé is also acceptable.

choosing the équipes is a serious affair

The game is addictive. All my American relatives have found themselves sucked into hours of genial play in the hopes of being the one whose ball wins the point for the team. My brother-in-law, Bernard, quite a good tireur himself, hosts an annual tournament at his home (many Provençaux clear a spot on their land for a terrain de Pétanques). The 2013 “Coupe Gecko” lasted well into the night (Bernard installed lighting this year), and winners were awarded magnums of champagne and good wine.